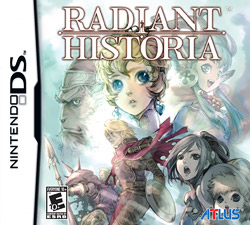 Radiant Historia is the story of Stocke, an intelligence agent in the nation of Alistel, one of several nations in a continent that is suffering desertification thanks to the unbalance of Mana. People are dying en masse, the world is basically becoming a desert in a very accelerated rate, and the forces of fate have chosen Stocke as the tool to fix the crisis. Stocke is also chosen as the wielder to the White Chronicle, a book that allows him to travel trough time and change his decisions as he sees fit. With such an amazing book, we would think that saving the world is an easy task, but it is not. Besides the desertification, Stocke will need to deal with the impeding war, rebellions, trials, the relationships with his allies and enemies, and a mysterious force that also seems to be affecting the flow of time.

The protagonist is a experienced elite soldier, who is always smart, focused and interesting. This is better than the mute and forgettable protagonists of so many RPGs and much, much better than the uni-dimensional whiny adolescents “with a strong sense of justice, friendship” and a messiah-complex that are the protagonists of the rest of the RPGs. Other characters in the game are equally interesting and complex, and they make important decisions as the different timelines in the game progress. You never know if a cute and charming female character will be your love interest or one of your worst enemies. In the same way, you never know if your best friend will share the glory with you or if he will betray you if the need arises. Best of all, you do not know if one possibility will occur in a timeline and the opposite will occur in another one. All this makes the story unpredictable and engaging. I was surprised noticing that trough the game, I felt truly sad about some characters and really happy for others, while the villains really made me hate them. At the end of the game, I felt a sense of nostalgia just thinking that I would no longer spend some time getting to know the characters. Very few games can accomplish something like this, and it is the result of good writing, great character design and an amazing story.

The battle system is based on a grid where the enemies are located. They can use offensive and defensive tactics and formations, and you can literally push the enemies around in order to group them and attack many of them at the same time to perform combos. More importantly, enemies closer to you will deal more damage, but will also receive more damage from your attacks. There are enemies who are larger and moving them will affect several other enemies at a time. There are other enemies who will not move around the grid. All this adds a very fun strategic element since you always try to look for the optimum way to use your turn and special attacks in your favor, and even try to thwart the enemies before they have a chance to act. While in the field, you can see the enemies and even attack them before the actual battle sequence begins, doing this repeatedly will cause the enemy to become dizzy and will grant you an advantage once the battle beings. However, if an enemy approaches you from behind, the advantage will be theirs, and will make the battle a little harder. This is an interesting way to expand the strategic elements in the game. When you are low on health, you will want to use the advantage as often as possible, but when you want more challenge you can just approach the enemies indiscriminately. I think this is a good way to balance the difficulty in the game, because you can make the game harder or easier as you need, without changing the difficulty of the whole game.

The art is really good, specially the beautiful characters portraits and fluid battle animations. However, the 3D environments sometimes look basic and dull, but I think this is more related to the limited 3D capabilities of the Nintendo DS rather than to Atlus’ artists. That said, I would have preferred environments in 2D only.

The music is simply amazing. I tend to deliberately lengthen some battles just to keep listening to the music composed by Yoko Shimomura, who also has composed basically all the songs in the Kingdom Hearts and Mario & Luigi series among many other successful games like Super Mario RPG, Legend of Mana, and Street Fighter II.

There is a lot of dialogue in the game, and due to the frequent travels back in time, sometimes you have to repeat lengthy scenes several times. The good news are that the scenes are elegantly written and you can skip or fast-forward most of them.

The game sometimes feels too big in terms of story and dialogue for one single small cartridge. Sometimes I got the feeling that such a rich story should have been better portrayed in a movie or a book, but the time travel mechanics would make this just too cumbersome or even impossible. The profound story is fantastic and very deep, it subtly includes important themes like control, conflict, love, free will, technological progress, environmentalism, religion, racism, segregation and trust. The ability to travel back in time and choose a different path makes the player think in how his or her life would be different with such a power. However, it quickly becomes clear that trying to have a perfect life is futile. There is no perfect path and trying to fix a problem often creates more difficulty. The game raises important philosophical questions to the player and often gives the player choices that will directly impact his own fate and ultimately the fate of the world.

Each nation in the continent represents a flaw in the human condition that must be solved. Alistel is the most technologically advanced nation, it has a grim and dirty look and its people are controlled by the holy word of a religious prophet. You can speak with the children and they will tell you how much they love said prophet, even if they have never seen him. Alistel represents the delicate balance between science and religion, and shows how even when they are working together and in harmony, they can create disastrous results without the proper direction. Celestia is the nation of the “Beastkind” whom are very racist towards humans and don’t even allow them entrance to the city, and when you finally can enter, they will not trust you and will expect you to behave like a savage animal, since you only are a dirty human. Cygnus is a fragile nation that is full of people that entertain themselves with violence, fighting tournaments and brawls in bars. Ironically, this acts like an escape valve and they are mostly friendly. Granorg is the only nation that still has a monarchy, such control is often corrupted and then disputed. Rebellions and their retributions are brutal, sometimes even resulting in people dying in the streets without empathy from anybody. Forgia is the land of the Gutrals, who are also wary of humans, since they have been betrayed by them in the past. They are a proud warrior tribe who request many things from you for only a chance to speak with them. Their fighting nature also offers them the possibility of renouncing their reason and become mindless killing machines. All these situations need a solution and you can try to solve them, but it is up to you if you decide to cure the wound of each society.

As much as I love Chrono Cross, Radiant Historia, while long and sometimes necessarily confusing, is so good that it could have been a worthy and acclaimed sequel of the beloved Chrono Trigger (and this could easily have been done by changing some characters and locations, due to the obvious plot similarities). Besides, it is the only game that, thanks to its game mechanics, offers a New Game+ mode from the very beginning. It is a shame that this game is not as widely known as it deserves to be. I haven’t had this much fun with an RPG since Golden Sun, so let’s hope that Atlus does not forget about Radiant Historia and we get a sequel or a remake in the future.