I had the opportunity to attend IBM Interconnect 2017. This was my first time attending a serious technical conference and I must say that it was an excellent experience for many reasons.

The reason I was sent to Interconnect in the first place was to show a proof of concept of a project I had been working on for the past few months. I might write about that project in a future post but in this post I will focus on the overall Interconnect experience and the things I learned during the event.

As usual, the event took place in Las Vegas, more specifically, in the Mandalay Bay convention center. There was another event called IBM Amplify at the MGM Grand, but I did not have the time to attend (which is quite ironic since I was staying right there, at the MGM hotel). 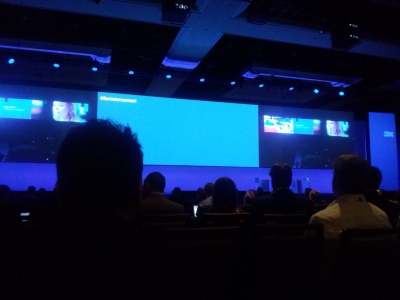 I had access to the venue since day zero, which means I got to see how everything was put together. As a matter of fact, I was extremely disappointed during the first day because I got to the convention center and I only saw a gigantic warehouse with many boxes in it. I was impressed by the ridiculous size of the convention center, but I was much more impressed when I saw how, in just a matter of hours, this almost-empty warehouse was converted into an actual technology conference, complete with booths, places to eat, enormous screens, a couple of mainframes and a few humanoid robots. That, and thousands of humans beings.

I did have some free time every now and then, which I used to get lost in the crowd, grab some swag, speak with random interesting people and attend a few sessions. However, I missed some of the sessions that I wanted to attend, like Ginny Rometty’s keynote and Will Smith’s interview. Thankfully, replays are available at IBMGO and/or Youtube. The following are some of the things that I liked the most. 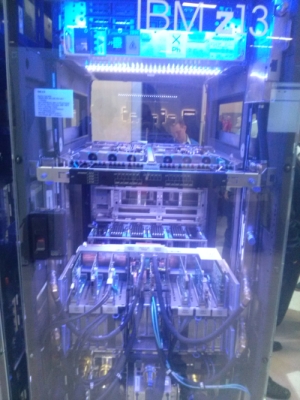 IBM had on display a couple of their legendary Mainframes. They look impressive, mystifying and gigantic by today’s standards. A very friendly representative approached me and explained the advantages of the mainframes, which, according her, are far from dead. She gave me a quick tour of the components, mentioned that mainframe’s main focus on reliability and compatibility, that most Fortune 500 companies still rely on mainframes, and they are way more affordable than I expected. It was quite an eye-opening experience, learning that such old technology is still alive and well.

To be honest, I had no idea what Recorded future was. I only got close to this booth to get a figurine of their super-cute mascot, Marty the Martian. However, once I was on their booth, Alex (whose last name I don’t remember) approached me and explained what Recorded future does: They basically crawl the web looking for intelligence about security treats, then, they use machine learning and all sorts of algorithms to warn their clients about vulnerabilities and exploits that could affect them in the near future. They are basically taking a proactive approach to IT security using analytics, which I think is a great idea.

I spend some time talking with the IBM analytics teams, they where very friendly and answered all of my novice questions. In fact, they provided very useful recommendations about Watson Analytics and Data Science Experience.

This was actually Canonical’s booth, but everything was branded with the Ubuntu logo. Ivan Dobos, a solutions architect, kindly explained to me how Juju works and its use cases. I was very impressed by Juju’s capabilities and it is something that I will definitively explore in the near future. 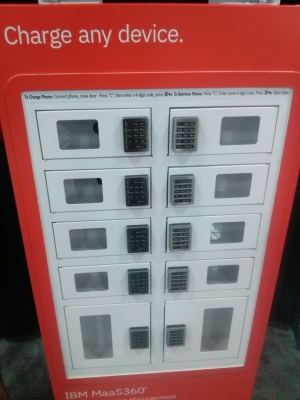 There were a couple of lockers where attendees could lock and charge their phones. A brilliant and very simple idea. Of course, this is not cutting-edge technology, but it was smart, useful and easy to use, which are three characteristics that are often forgotten while designing solutions to problems.

Somewhere in a IBM office, somebody was faced with a critical problem: “How can we make videogames even more nerdy?” the answer is Bluemix Server Challenge, a VR game where you take the place of a heroic data center admin and pickup hardware which needs to be correctly placed into a rack. I did not have time to play it, but everybody absolutely loved it.

During my days at the conference, I heard so many languages and saw so many faces. Technology truly is one of the few things with the ability to bring people together regardless of nationality, language or any preconceived “differences”. I was often reminded of those lines in the Hacker’s manifesto…

This is it… this is where I belong…
I know everyone here… even if I’ve never met them, never talked to them, may never hear from them again… I know you all…

I now understand that conferences of this size are better used as intelligence gathering points, where decision makers, innovators, thought leaders and futurists can get a first-hand idea of the technological trends that will inevitably influence the directions of the other industries in the following years. Even better, all this people can interact to generate more ideas.

I hope I have another chance to attend Interconnect (or any other tech conference) again. More importantly, I hope I can continue attending while being paid for it. However, while the tickets could be seen as expensive, I am convinced that these conferences are invaluable if you take the time to attend labs, sessions and just try to engage in conversations with random people, after all, smart people from all over the world travel to attend and you never know who may be listening to your ideas, or whose ideas you could listen to.