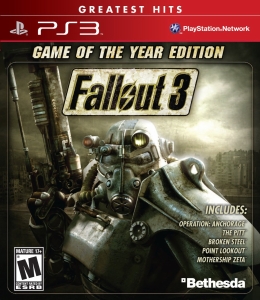 Welcome to the Wasteland, a very dark but hilarious world. When the worst has already happened, there is no other option but to laugh. Probably other people will not find this game so funny, but when you have such a sardonic and dry sense of humour, it is impossible not to laugh constantly while playing Fallout 3. The people in this Wasteland try to face their dilemma and live their lives in any way they can. Some of them long for the elusive peace, salvation, and order, some of them embrace their suffering completely and build their existence around it resorting to murder and cannibalism, and some of them are just completely insane. Civilization and the structure of society has crumbled completely and the different fractions try to rebuild everything, with mainly misinformed and dysfunctional results. The interaction with these characters is what makes Fallout 3 so good.

Depending on the decisions you make trough the game, you can traverse the wasteland either as a mostly neutral person, as a beacon of hope to everybody or as the devil himself, bringing final doom to the already agonizing Earth. This affects your reputation. If you are considered evil, the NPCs will shoot you on sight, but if you bring justice and are acclaimed as a hero, they will offer you free items as a token of gratitude. Also, some companion characters will not join you if they disagree with your past actions, either good or bad. This obviously increases the replay value of the game since it is impossible to do everything in only one playtrough.

The capital wasteland looks beautiful in its signature post-apocaliptic retro-futuristic dystopian style. It is also overwhelmingly vast and it is full of interesting places, from the faded elegance of the White House, the Jefferson Memorial and the Washington Monument to neglected underground tunnels, irradiated sewers, and several traumatizing Vaul-Tec Vaults. In the same way, the Wasteland is home to many interesting factions. There are AIs and robots that are perpetually trying to fulfill their objectives. For example, one home-assistant robot is still trying to feed the carcass of a pet, and reciting “There will come soft rains” by Sara Teasdale to dead children as a bedtime poem, which comes as brilliant (and very dark humour) if the player has read Ray Bradbury’s short story of the same name. Other robots are “normal” and just try to kill everything that moves. There is also a town populated only by children, who exile any kid who grows up enough, which in turn goes to live with other outcasts, like some sort of twisted Peter Pan adaptation. There is also the Brotherhood of Steel, a group of futuristic knights using powered armours and laser weapons with a fanatical devotion to democracy and their own set of feudalistic rules. And then we have The Ghouls, who are basically intelligent zombie survivors who are forced to live underground to avoid racism and hatred from the “normal” people. Those are only some of the groups that you get to meet. There are also giant insects, mutated two-headed cattle, a talking tree, aliens, mutants, super-mutants, giant super-mutants, etc. You get the idea.

The music is really good, and is a central part of the story, following the retro-futuristic theme. There are several radio stations that you can listen to and most of them play music from the 1950s, but some of them play indie radio shows, ultra-nationalistic political propaganda from an unknown self-proclaimed president, distress signals and mysterious Morse code transmissions which you could choose to investigate, triggering side-quests in the process. The voice acting also deserves a special mention, since there are hours of spoken dialogue perfectly performed by actors such as Liam Neeson.

Fallout 3 is as long as the player wants it to be, there are thousands of things to do in the Capital Wasteland. All five DLC expansions are already included in this Game of the year edition, to add length to an already long game. The player can instantly transport from one location to another, but it is much more interesting and fun to just walk to your destination. There are so many things and locations to be found in the wasteland, that it makes fast-travelling feel like a waste. When I completed the game, I was already impatient for the credits to finish rolling in order to continue playing.

This game awakened my inner hoarder. Across the Wasteland there are many objects which you can collect, from rusty spoons to alien weaponry, but all of them useful in one way or another. For example, you can fix your own attire using the material in clothes you find. The same goes for armours, accessories and weapons. Since everything wears out with use and damage, it eventually stops working. A weapon that has not been maintained and repaired regularly, will do less damage and jam constantly. You will find yourself collecting every single thing you can carry, because it could be useful. Thanks to the violently accelerated entropy in this irradiated world, the merchants pay top bottlecaps for any item in perfect conditions.

In the back cover, there is a quote saying “Fallout 3 is the ultimate video game“, and this feels accurate. It is, at least, one of the best games of the generation, and it is worthy of the many awards it received. This Game of the year edition offers even more content and is an even better deal. I have played this game for more than 100 hours and I still find it incredibly enjoyable, and I know that I could easily spend another 100 hours with it and still have fun and find new interesting things to do. The PS3 version of the game suffers from constant bugs and crashes, but even so, this feels as a minor inconvenience for such a fun game. The PC version is preferable since it is more stable and the modding community has made some impressive work with it. This makes me wonder how impressive the future sequels will be if they fully take advantage of the newer consoles and high-end PCs.